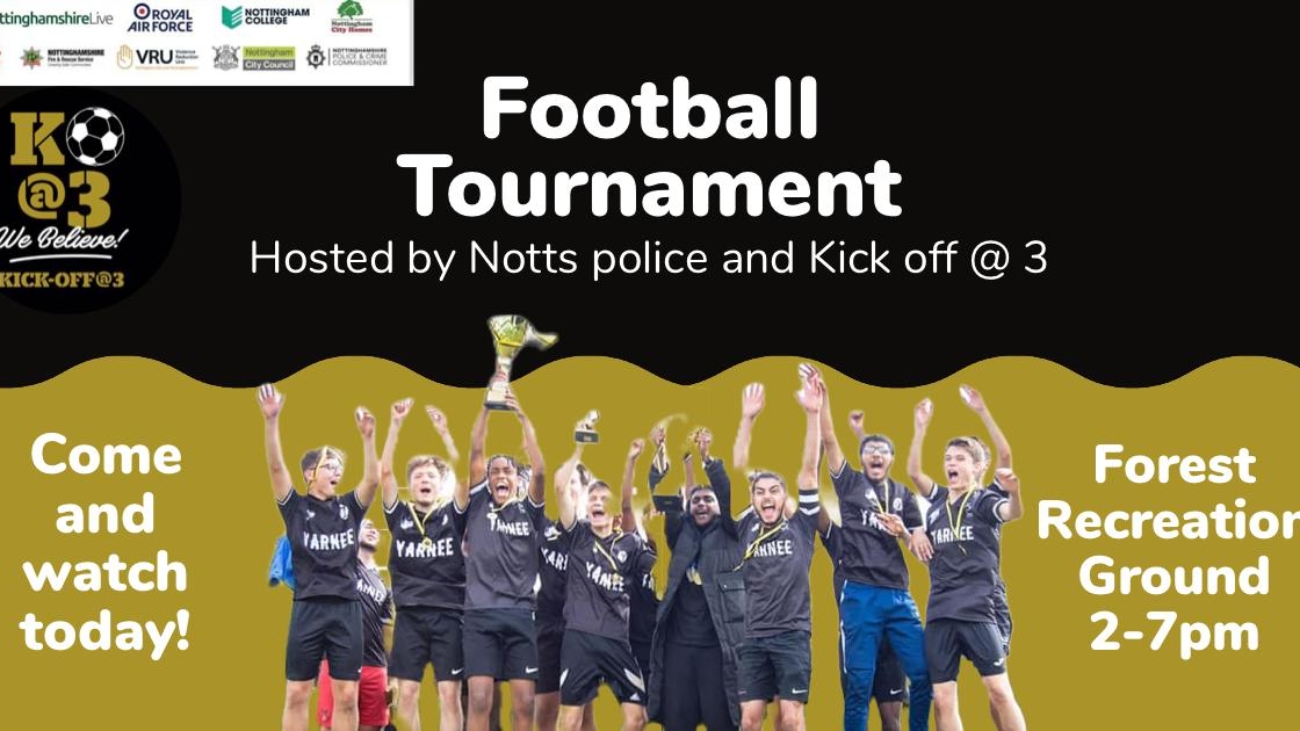 A massive congratulations to AJ Sports who were crowned our Kickoff@3 2022 Nottinghamshire Champions last weekend. They won both the Under 14’s and Under 17’s age groups.

Well done to Jemma for organising a very impressive tournament, with over 200 young people in attendance. 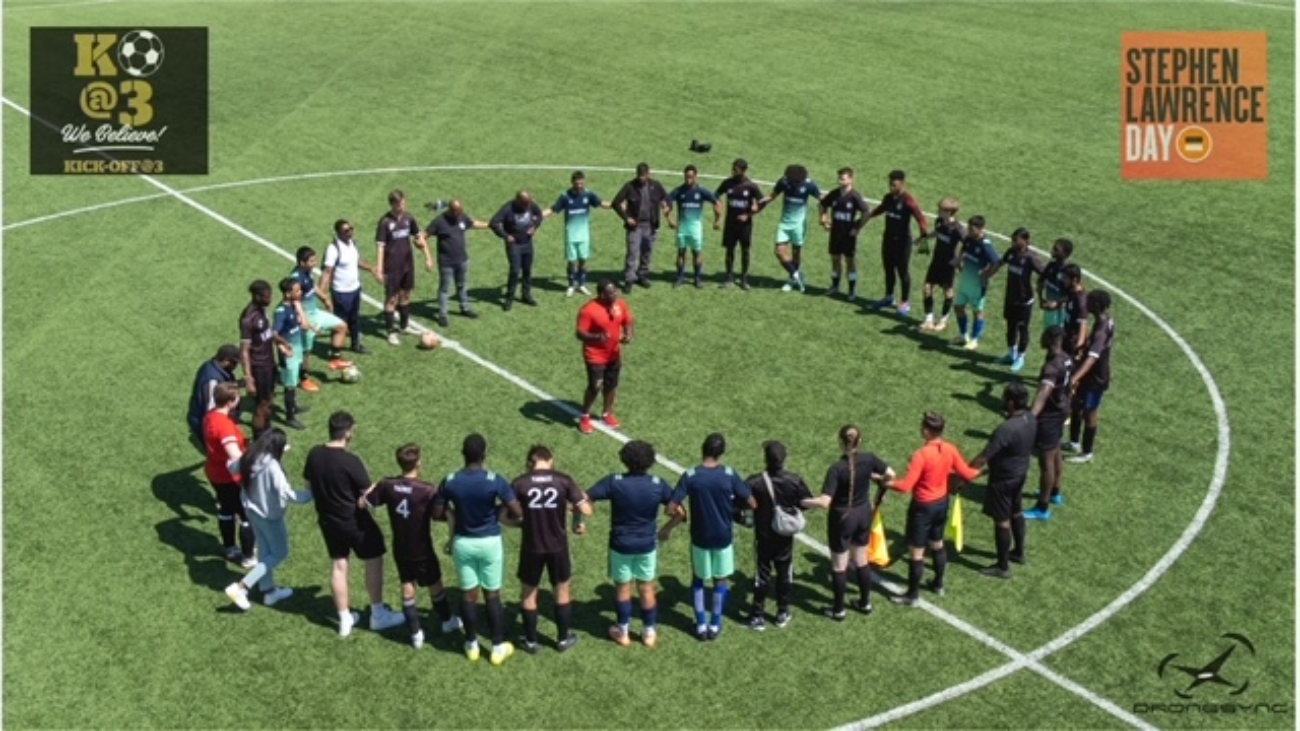 On behalf of Ashley and I and all the partners/ supporters involved in our Stephen Lawerence Community Football Rematch hosted on Saturday at Barking Fc, we wanted to sincerely thank you all.
We are very grateful that Rob Obrien who is the club Chairman of Barking Fc, kindly allowed us to use his wonderful facilities to host the rematch. The club showed us great hospitality in good support of the occasion and the Stephen Lawerence Foundation.

On Saturday there was a warm and vibrant community atmosphere as Yarnee Fc and SL Kings Fc, played with an amazing spirit on a very hot day, where it was humbling to see so many young people from various post codes and diverse backgrounds coming together in unity in loving memory of Stephen Lawerence. Thank you Jack for refereeing the match supported by your two linesmen and women.
Well done to Yarnee Fc for narrowly winning 1-0, after a very even and hard fought two matches played. They are the Stephen Lawerence Day 2022 Football Champions. However all the young people who took part for Stephen, were  Champions  of the community! Great fighting spirit by SL Kings who represented their club and families  with pride.

As the Co Founders of Kickoff@3, Ashley and I are extremely  proud we were able to work closely with you all to deliver a wonderful two events.

To end we have to give our final thank you and special mention to Tony and Sophie, for attending on the day to produce amazing drone film footage and photography. Tony’s drone photos are attached, which are phenomenal!

Over the coming days when Tony and Sophie are both  free, they will be  working hard together to edit the drone footage and official photos. I believe there are 1600 photos to edit.  Once completed everything will be shared between us all, so you can freely use on social media and your various websites.

For now thank you team and we look forward to working again with you all again soon.
We were honoured to support the Stephen Lawerence Foundation again from last year, with our on line music event and awards ceremony hosted. The movement will not stop to create change by all  working together.#BecauseOfStephen #LiveYourBestLife 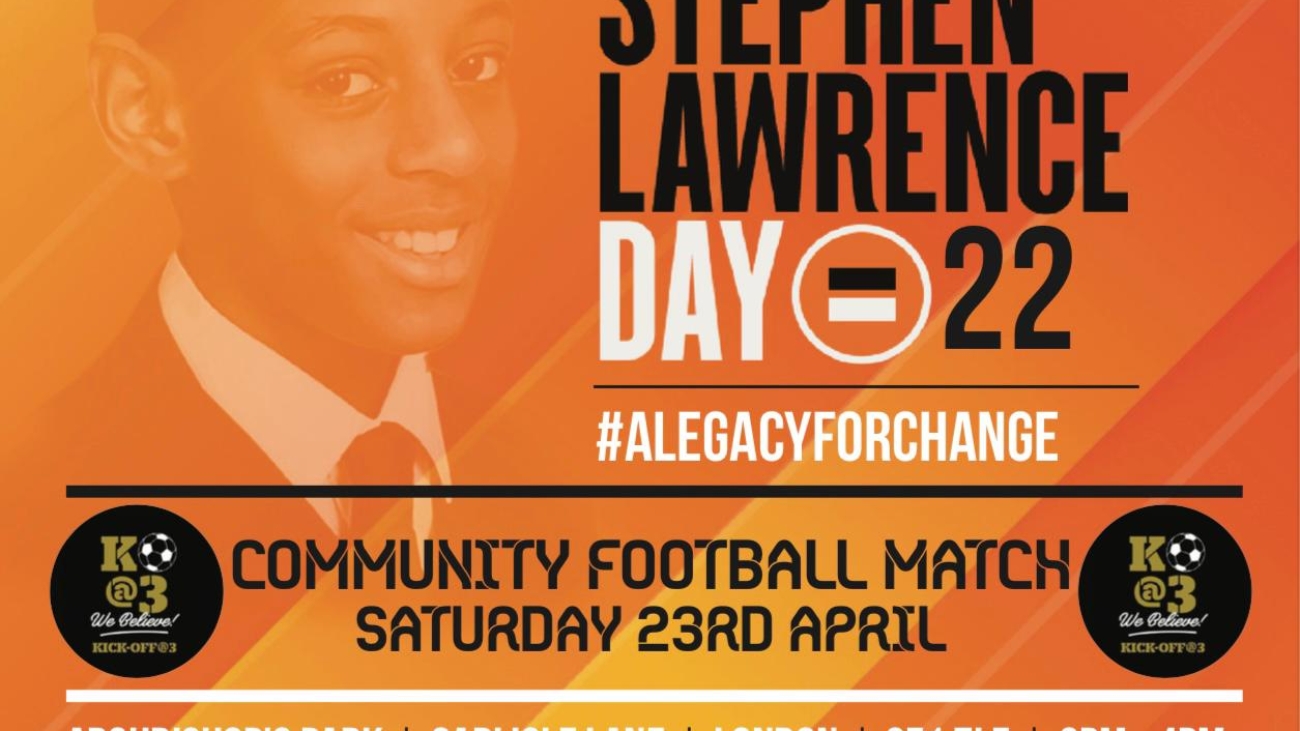 On behalf of Kickoff@3 and all the fantastic partners involved, it was a humble pleasure to deliver our cohesive football match on Saturday in loving memory of Stephen.

Very fitting for the occasion that it ended up as a 1-1 draw, in a closely competed game played in a fantastic spirit bringing South and East London together in unity with SL Kings Fc and Yarnee. There will be a rematch in due course, to crown the ultimate Stephen Lawrence Day Winners.

However for now we are all savouring the warmth and love from everyone who attended and contributed to a very successful event.

Humbled that Clive Driscoll and your Honourable Stuart Lawrence attended as guests on the day, which humbled the audience who appreciated the great support for the occasion.

As you may be aware not only was it a wonderful day hosted in the heat beat of Lambeth Borough, there was positive media coverage surrounding the event on BBC Radio London, Colourful Radio, ITN News and the Havering Daily . Also there was a Podcast from Tony Rice.

Not only did we host the Football but we had Sammy 777 and Boy Sayso, who are two young men who composed songs especially for Stephen Lawrence Day, which has attracted amazing interest.

Paul Mckenzie from Youth Unity capped the day with awesome film footage, which featured the wonderful flyer produced by Lee Wood from Ember Designs that we have used to heavily to promote the event on social media.

I have attached some photos taken from Sundays event, but I am sure others will have too.

You will find listed below the song links composed by Sammy 777:

All in all a wonderful event where we are all humbled, as we strive for Stephen’s legacy to remain.