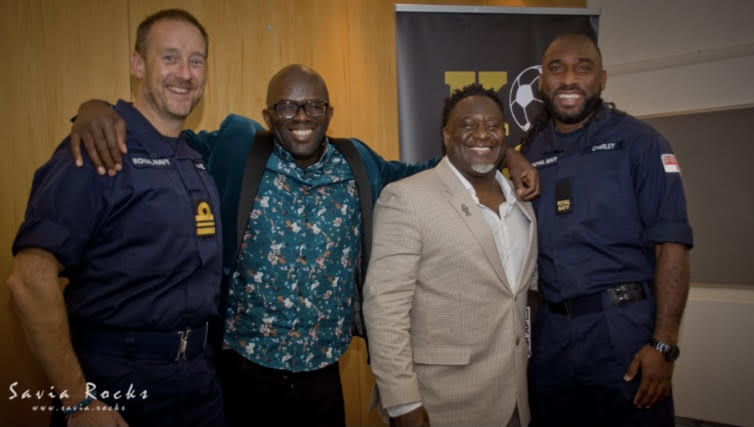 The film hit the screens of Abbey Theatre, on October 15. This was a first for the community and sparked conversations around the film’s boundary pushing narratives

DURING BLACK History Month, KickOff@3 brought a fun-filled evening to the community of St Albans with the screening of Blacks Can’t Swim Rewind.

The film hit the screens of Abbey Theatre, on October 15. This was a first for the community and undoubtedly sparked conversations around the film’s boundary pushing narratives.

Blacks Can’t Swim Rewind is an all important film which explores the stigma associated with people of colour and swimming. The film is the third in the documentary series and intends to change the narrative through a collection of powerful conversations. Newly released to Sky Store and various other digital platforms, Blacks Can’t Swim Rewind highlights the importance of water safety and why the ability to swim is an essential skill to possess.

Ed Accura, writer and producer of Blacks Can’t Swim and co-founder of the Black Swimming Association (BSA) said: “The Blacks Can’t Swim Rewind film documentary opens up sensitive conversations on the disproportionate numbers of people not engaging in aquatics through the lived experiences of people from African, Caribbean and Asian heritage.

“It’s only by having these conversations do we have any hope in changing the narrative.”

Statistics show that 95% of black adults and 93% of Asian adults do not swim and 80% of black children and 78% of Asian children leave primary school unable to swim, as per the Sports England Survey, 2019.

The youth-led event was co-hosted by Samson Alexander, Jones Kamil (who both play roles within the film) and Rhiann O’Connor (social media lead for KickOff@3).

KickOff@3 prides itself in providing opportunities for the youth. The event also featured a series of discussion panels, guest performances and allocated areas for those wishing to seek advice in water safety and various other sectors. The evening also saw special guests in the form of the Royal Navy.

Kickoff@3 is a collaborative initiative set up by Michael Wallace and Ashley Levien, who wish to engage with young people, using sport, music and other imaginative ideas to spread awareness.

The organisation has gone from strength to strength, positively impacting hundreds of young people across various communities in the UK through its many initiatives, campaigns and workshops. The pair, along with KickOff@3’s youth volunteers, ambassadors and partners, work hard to educate young people, diverting vulnerable youth from criminal activity a

Following on from the success of this event, a week later KickOff@3 and Ed Accura also screened the film in partnership with Nottingham Police at Trent Bridge cricket ground. It was another special event which had young people performing.

Wallace, co-founder of KickOff@3 said: “I am absolutely delighted and humbled that KickOff@3 along with young people from the local community of St Albans are working in close partnership with the BSA and Ed Accura.

“After our huge community impact, there is now a call for action for police forces nationally and key stakeholders to believe in us, by working in close partnership with Kickoff@3 and Ed Accura.

“We’re working together to continue to spread the importance of water safety and increase drowning prevention rates.

“I would like to say a big thank you to all of our sponsors, partners and volunteers who believed in our ethos to deliver this specific screening within St Albans.

“It has taken months of hard work, dedication and tireless campaigning to achieve objectives. Much love to Savia Rocks for her wonderful photography during the evening and Tony from Dronesync, for his amazing film footage from the evening also.

“Hopefully going forward we can encourage more black and Asians to learn how to swim and ultimately save lives.”